The Collection of Silence

Tonight, I'm taking part in Eileen Myles' Collection of Silence at the Hispanic Society of America,
Posted by Jennifer Bartlett at 8:29 AM No comments:

I let my kid start a blog. It's called ppppokemon.blogspot.com

Some good poems there.
Posted by Jennifer Bartlett at 7:28 AM No comments:

Below are my thought today on the LE book: Note there may be typos as in process; also, I hope I didn't use any quotes people didn't want me to use. A bibliography will follow:

What started this essay was a curiosity of the lack of discussion of the influence of 'restricted movement' in Larry Eigner's work. There exists a sort of a claiming that Eigner's body was secondary or not influential in creating his voice. What is interesting is that, as I research Eigner's letters, ignoring the issue was not how he dealt with cerebral palsy. He begins letter after letter stating that he is 'in a wheelchair.' This explanation is always matter of fact.

Eigner was a poet who was loved intensely. To read the essays by Jack Foley, Ron Silliman and others is to find words full of understanding. Many of these poets admit the obvious difficulties. Jack Foley, Eigner's friend of ten years, writes, 'I was able to stay friends partly because I didn't live with him and partly because I understood his speech as well as anyone. This was more something I willed than something I learned.' I am assuming that this relief at not living with Eigner may have been from, not only not having to take care of Eigner, but from getting rests from his intensity which seems to have rival Robert Duncan's.

Foley explains Eigner's will, not just to write, but to speak. This is apparent in the radio interview that Foley did with Eigner. Foley attempts to interact -- to translate. Eigner just keeps talking without pause. In Eigner's passion to communicate through copious letters, poems, and conversations one is forced to see the true situation of cerebral palsy -- or any other disability. While the different body becomes so-called less than, the will becomes more than.

For the poets who loved and surrounded Eigner, however, to name this body would mean to have to deal with the constant barrage of idiocy that comes - not from the actual body, but the reaction to it. This societal bigotry is much more tedious than disability itself. It is much easier to cope with society by ignoring the crippled self - to make Eigner one of us. There is a subtle distinction to be made here. The difference is to accept Eigner fully as a person with cerebral palsy and to accept cerebral palsy fully in the way one would claim to accept homosexuality or race or any other 'different' given. Not as less than, but as is.

In a defense of the poet who is disabled, the so-called able-bodied community is forced to defend the poet on two fronts. The first of which is dispell society's attempt to 'cutify' the poet's work. A disturbing example of this would be Eigner's New York Times obituary 'Poet Who Saw the World From His Wheelchair' which condescendly overplayed disability in Eigner's work; "As a result of a birth injury, he developed cerebral palsy, a condition that confined him to a wheelchair. His disability had a profound influence on his poetry, which often captured, in emotional bursts of language, fleeting impressions received through the window of a house, an airplane or a car window." Rather, Eigner's case is, as Silliman notes of an earlier event, "The interviewer wanted to make of the occasion an uplifting "my left foot" kind of tale, amazed that someone so afflicted with cerebral palsey could write poetry at all. But that of course was NOT the story. The story might have been this: that one of the great poets of the 20th century -- no further qualification needed -- happened to have had cerebral palsy." And Sillian might have noted that 'My Left Foot' wasn't exactly even a 'My Left Foot' story; Christy was a obnoxious drunk who played on the streets as child equally with his neighbors and brothers. But, O how society wants to manifest things. To package stories into something 'we' can accept.

The task in the poetry community to protect Eigner's work from 'cute little handicapped poet syndrome' is a valid one and I think it why poets such as Curtis Fayville are hesitant to through disability into the mix. But, the work is powerful and oblique enough that it manages it's own task. In Eigner's own disjointed lyric, he gives permission to explore the role of disability because the work isn't about disability itself. This also brings into play the fact that the other always has whether/how/and how much she will let this otherness gain attention for her work. Some poets go the opposite spectrum. One such poet is Paul Guest, who has chosen to make disability the forefront in his work -- to the extent that he has a pending autobiography. This willingness (or non-willingness) creates a tension in every disabled poet's life and work.

The second difficult role that the able-bodied critic as friend or admirer of the fully realized poet with a disability is forced into a position of defending. It is shocking how, within the poetry community with all our freaks and outsiders, prejudice abounds. While I don't suffer fools lightly, I recently came across an 'essay' written by Kirby Olson's from last December where he claims, "I remember Eigner had been brought up in Larry Fagin's class at Naropa University in 1977. That was the only time I had heard the name. I remember too hearing that he had a disease or a disorder of some kind, and I didn't know what to make of it. I think it's cruel somehow to think that a defective mind that is unable to process words properly is therefore "poetic."' Here, is an example of the so-called able-bodied speaking liberally about something he know nothing about. The person with cerebral palsy is put in the tedious position of explaining that CP is a 'disability' not a 'disease' and cerebral palsy, itself, is a physical condition, not a mental one. And then one must deal with the fact that people are unable to understand such distinctions and their meaning.

The primary barrior is that the able-bodied critic simply does not know what it means inherently to be disabled. People argue that by association, one can come to realize what disability truly means, while functioning on a dally basis in a body that society endorses. One wonder whether having a disabled child, for example, might give the parents a new understanding. Although I am sympathetic, my estimate is that, with the exception of the Deaf community who don't accept Deafness as a disability, the able-bodied parent always longs for their child to be cured instead of truly accepting them.

Can disability be sexy? Not sexy in meaning I want to fuck you - but sexy as Peter Littlefield would use it ; attractive in the global sense. Can disability be anything other than the old metaphor we have assigned it ; weak, ugly, distasteful, less than, messy. Can it be translated into something new and powerful? Can a disability pride exist?

Of course, for much of Eigner's life, so-called disability pride or even understanding was farfetched, as it still is by most today. In Eigner's day, people with cerebral palsy (and their caregivers) were merely involved in the struggle not to be abused in institutions such a Willowbrook. Eigner's situation was so vastly an exception.
Posted by Jennifer Bartlett at 10:28 AM 1 comment:

The NYFA's poetry Fellowship list was released today. An extra congratulations to my loves - Lisa & Marcella - Mothers of the world unite & take over! Meanwhile, I'm putting the final touches on (a) lullaby without any music & looking into my next project which is probably going to include Larry Eigner in some fashion. I also have to figure out the best way to get a bicycle from Brooklyn to Portland Or. I wonder if I should just ride it. 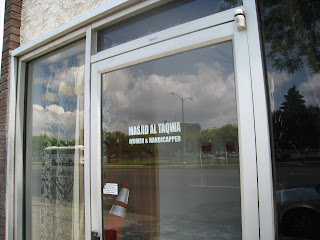 This is what a feminist (and goddess) looks like.

And some words on Catholicism from my home-girl Fanny Howe:

The New American Writing is out!

Finally, I'll be reading (or not reading as the case may be) on June 30th inThe Collection of Silence project curated by Eileen Myles at The Hispanic Society of America.
Posted by Jennifer Bartlett at 7:49 AM No comments: