EOACH at the Chapbook Festival

In a few minutes, Ill be grabbing an ice coffee and heading over to the CUNY Graduate Center to read for EOACH and the fabulous Tim/Trace Peterson. This reading is dangerously close to the store with the $35 pretty dresses. Chapbooks? Pretty dresses? Hmmmmm


First let it be said that Eigner is never careless. If he seems arbitrary it must be understood that he is deliberately arbitrary. Whether from the personal circumstances of his life or not, he sees the world from an unusual angle. Often in his poems he is noting the disconnected passage of objects as seen from a moving car. He notes these caprices of the unintegrated world- a world unthinkingly modified by self-absorbed human activities – with the precision of an innocent, but intelligent mirror. In a room, at a window, -- it is always, not what you would see, nor I but a view narrower and wider – more aware of some humble details, More aware of greater spaces also. In a world where anything may happen, since, deprived of some wise-guy logic most of us acquire, Eigner does not let perceptions close in his horizons.
In his best poems, he shares with us this wide open filed of vision in which disparate objects activate themselves, move apart of closer to each other, or at great distances from each other reveal to us an essential connection of which they remain unconscious. He gives to the humblest pebble the same attention- and so the same value by implication – as to. let’s say, a man. Instinctively, our pride cries out against this- until perhaps pride breaks and we look again and see there is no contempt for man n this attention given to a pebble only the sense that both are strange unknowable unpredictable.
Reading Eigner the reader has to keep his imagination at work and leap from line to line as fast as the seagulls sweep across the square of sky in a window joining a lonely chimney to a cloud by the line of their flight: Seagulls fly in and out of many of his poems,. The landscapes are mainly suburbaian, there is the sense of the scattered and sporadic one has at the edge of cities, where bits of old fence and field still hang about undecidedly, wondering if the country won’t come back after all.
There are some lines of Henry James (in the Bostonians) that several years ago I copied into a notebook under the heading “Quality of Eigner’s poems’: perhaps that was not precise, but these words do continue to express for me the atmosphere of a great many of the poems. (I didn’t copy the quote…)
The sea, the great life-giving unchangeable ocean, is nearby but not often seen is nearby always, but not often seen full and clear. It is usually back of other things, other people’s things, streets, houses, telephone poles, other people’s needs and decisions – for Eigner can’t get to the ‘real’ sea unless through the agency of others. Yet how much more present it is to him than to them, as force, as space, as the unconscious. He has to do a lot of guesswork about living, as most people know it: and he never pretends to definitive knowledge of anything but what he sees.
When I was asked to select from the mss. of this book what I thought the flower of it, I began tentatively putting aside those poems which I did not understand.  After a while that came to seem stupid. If one becomes familiar with Eigner’s work it becomes apparent, as I began by saying, with what care and intension he writes: and again, that more than almost any poet I can think of, he demands a suppleness, an imaginative agility to leap with him from image to image: so that I distain to judge (as I would with another kind of poet) which are ‘good’ and which are ‘bad’ poems. It is a question of which I can keep up with – and those I would have thrown out might be epiphanies  to another reader. It is only where there is a right degree of care and craftmanship that one can thus abandon ‘judgment.”
He does some things with spacing and punctuation: I don’t think that they always work, but what is important is that they are always designed to work, to function: that is, it is never a matter of unthinking mannerisms, much less of vanity, with Eigner. He regards spacing and punctuation rightly, as tools, and does not voluntarily obtrude them between the reader and the poem which they should be unnoticeably supporting. I myself dislike the unclosed parenthesis, as a poor tool having no function that can’t be performed better by other typographical means. But in Eigner I accept it for it seems expressive, again and again, of his own oblique (?) modest, set-aside yet not to be quenched, enquiring spirit.
What is most likely to be criticized here is a lack of coordination, or (and in this case it is the same thing) a lack of economy. It is admittedly hard to see form in such unique poems. There is no repetition, he makes for himself and the reader no precedents. But the answer to these charges is the same: each poem is in fact a searchingly experienced area having the form of its limits- it is for the reader to say with it, to realize in his own responses the connections between object and object,
No one reader in going to find his way in everyone of the poems. But there are many poems, many possible readers. Such poems make me think of floating seeds in September, their lovely hesitant apparently hazard movement passing by. The next year there are new patches of williowherb – ‘’’fireweed” – in unexpected places. So Eigner’s seemingl7y random words drift across the mind. And later one finds a flowering of new perceptions, perhaps in some part of oneself one had thought sterile.
DL  June 1959
Posted by Jennifer Bartlett at 4:17 PM No comments:

Professors at a University calling a Frida Kahlo painting "inappropriate"? As Basquiat/Jeff Wright says "I mean what year is this?" Below you will find a letter from my friend Denise Hill with a link to the video performance //poetry they did as a response. (I can't seem to get the actual video pictured - and Ted's not here).
Hi Jennifer –
I wanted to write to tell you about this performance:
http://bit.ly/H1QB2u
During Women’s History Month at our school (Delta College), there are cardboard cutouts of famous women placed around campus with information posters along with them.
New this year was the image of Frida Kahlo’s self-portrait in “The Broken Column.”
There were several complaints made – by staff, not students – that the image was ‘inappropriate’ (among other labels), and should be removed.
Members from the WHM committee were called into the college Equity Office  and were made to defend the cutout.
In response, I (standing in the middle) and two of my colleagues (JodiAnn Stevenson [on the left] and Chey Davis [on the right]) each separately wrote poems. JodiAnn then took them, mashed them, divided them into speaking parts, and we performed it unannounced at various times over this past week.
The poem and performance were very well received – in this final version video, there were about 70 people ‘in attendance’ – some who came because we had tipped them off as to day/time, and many because they just happened to be there.
The idea was like a “flash mob” – only it was our poetry reading.
I tell you all of this because my poem focused a great deal on the fact of Kahlo’s disability, the brace she wears in this image, and the idea of “normal” and “normalcy.” It was my perspective that those trying to censor the image were also attempting to silence this image of disability and the pain associated with what Kahlo suffered.
In my poem, I used the line/idea of “beauty is a verb” in direct reference and connection to your work with the anthology and disability poetics.
There will be no publication of the poem itself – it was purely meant to be performed as an act of protest against censorship.
In telling you this, I hope you will be okay with use of the phrase that comes from your book, and understand it was meant in solidarity and as a result of being inspired by your work.
Thank you.
Posted by Jennifer Bartlett at 6:20 PM 2 comments:

The Larry Eigner Kickstarter was funded! Thank you to the following people who donated!

The 612 Project/Jim makes Jeff into a Marxist, Lenin Oversees 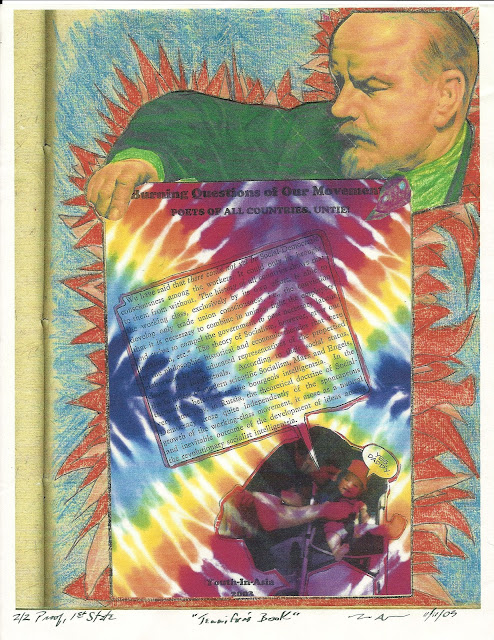 Posted by Jennifer Bartlett at 5:36 PM No comments: 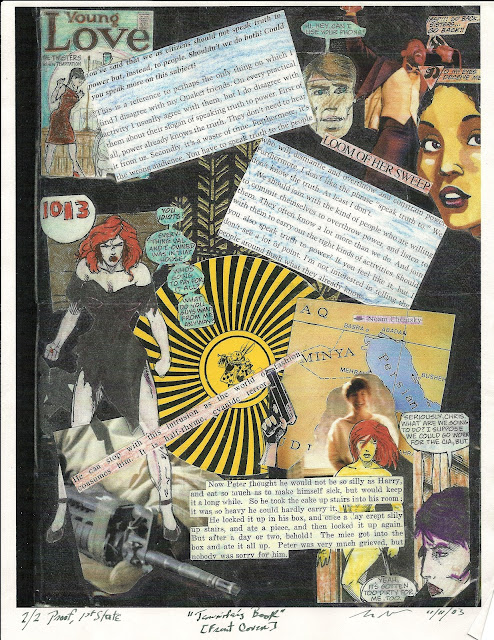 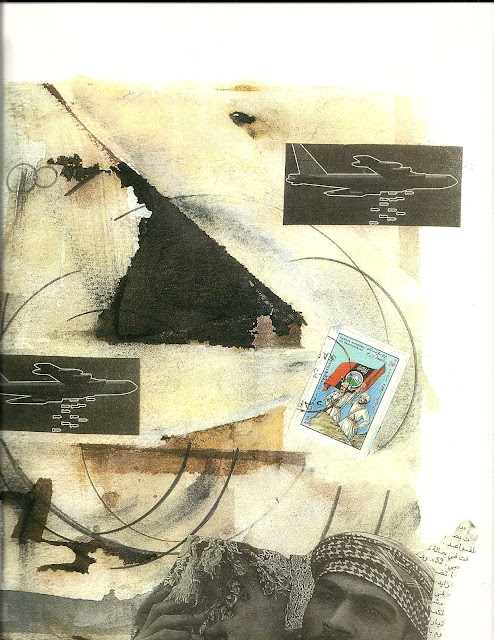 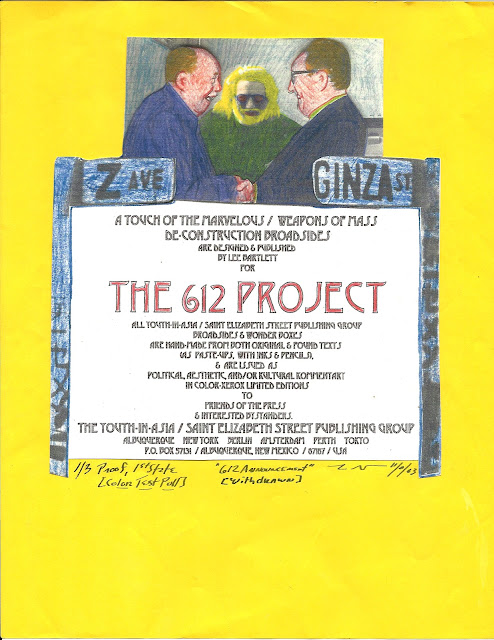 Posted by Jennifer Bartlett at 8:29 AM No comments:

One Less Thing to Worry About: Voting

I'm a busy poet, mother, copious animal owner, Brooklynite. Now, I'm relieved. I have one less thing to worry about: voting for president.

A week or so ago a soldier named robert bales killed 16 innocent people in Afghanistan. Bales was a victim too. Sent into war numerous times, turned down for a promotion, leaving at home a wife, two children, and failing mortgage. After the crime, according to the Times, the government erased all internet information about Bales.

This didn't happen because of Bush or Cheney. It happened on Obama's watch. This happened on the watch of a man who I walked into a voting poll,  pulled a lever and voted for. My one millionth of an opinion contributed to this situation. For me, that percentile is too high. I won't let that happen again. Ever.
Posted by Jennifer Bartlett at 5:22 AM No comments:

I am doing a Kickstarter to travel to Standford Library to research my Larry Eigner Biography there are only three days left and we have almost reached the goal! Please Help!

Posted by Jennifer Bartlett at 12:50 PM No comments: 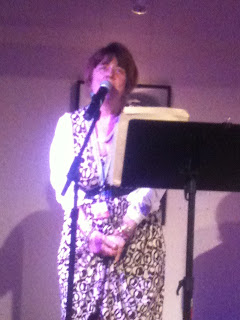 I wish to extend my happiest congratulations to my dear friend Sheila Black. Sheila was recently awarded the Witter Bynner Award by Philip Levine through the Library of Congress. Although Sheila's poetics are slightly different from mine, she has been a constant source of help and support the past few years. Sheila and I met three years ago when we decided (with Michael Northen) to edit Beauty is a Verb. Over those three years, we have had nearly a daily correspondence.

Sheila is a brilliant poet and thinker with boundless energy - in addition to being a wonderful poet, she is a successful grant writer, a mother to three amazing children with her fabulous partner Duncan (one of whom just got a nearly full scholarship to Mills College). She got us panels at AWP twice! She has been a constant support in both my poetic and personal life. She has helped countless women through her work on the Mexican border, and she is a strong disability activist.

I love you Sheila!
Posted by Jennifer Bartlett at 12:18 PM No comments:

http://www.kickstarter.com/projects/894916256/limits-are-what-any-of-us-are-inside-the-life-larr
Posted by Jennifer Bartlett at 8:37 AM No comments: