Beauty is a Verb 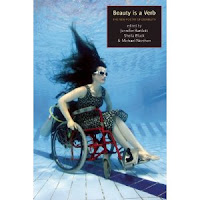 For the past year, I have been working on a project that I haven't been entirely forthcoming on. The internet turns my mind to mush, so I haven't been blogging for about two years. I weaned myself off facebook, and, now, although I technically exist there - I made a password that I don't have written down or memorized - and my email (from facebook) goes to an account that no longer exists.

Well, what have I been doing for two years - other that raising children and animals, talking on the phone, yoga, and reading Duncan? I just returned from 'the best summer ever' in Portland, Oregon. After that I got prepared for a hurricane. Now, I have an exciting backyard full of sand!

But, primarily, I've been doing THIS. Beauty is a Verb is the new anthology of poets with physical disabilities that Sheila Black, Michael Northen & I spent the latter portion of the last year compiling. As I write this, the anthology (published by Cinco Puntos Press in El Paso) is at the printer. While not comprehensive, the idea behind the anthology is a complex one dealing with disability from many angles. Poets included are Norma Cole, Jim Ferris, Rusty Morrison, Bernadette Mayer, Petra Kuppers, Denise Leto, Larry Eigner, and many others. Shortly, I'll be posting the Preface from the collection which explains (more or less) what we had in mind. We have readings coming up in Albuquerque, Los Cruces, Berkley, New York, and Philidelphia. We will also be representing at next year's AWP.

I've been doing a couple of other things too - I quit teaching (for good). I have a collection forthcoming from Chax in October! And I've been making drawing books of an addition of one which tell the story of a life. Right now, I working on Andrea's book & Jeff's book.

Meanwhile I have poems in Sam Lohmann's Peaches and Bats, James Yeary's ever name changing newsletter, and Michael Northen's Wordgathering.
Posted by Jennifer Bartlett at 1:16 PM